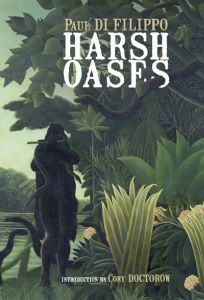 Harsh Oases is Paul Di Filippo’s thirteenth collection of short stories, an indication that he is most certainly a devotee of the short form. What is striking about Di Filippo as a writer, as evidenced in previous collections, is his range, both in terms of style and subject matter. Previous collections have demonstrated a multitude of ideas that are treated sometimes in a serious vein, sometimes humorous. It is this very variety that has perhaps kept Di Filippo out of the limelight to an extent; there is no easy label that can be applied to him, there is no typical trait or trope that can be handily attributed to him. And yet there is such a thing as a Di Filippoian or Di Filippesque story. It is not always easily recognised, but there is a certain gonzo quality to a typical Di Filippo story.

Harsh Oases offers fresh and rewarding evidence of this in what proves to be a bumper edition of short stories. Seventeen stories run the gamut of concerns, ideas and styles that a reader can expect from Di Filippo. A couple of the stories are very short: ‘The Perfect Lover’ and ‘Cootie Box’. However, even here, we see his quirky sense of humour exercised to good effect, the first story being a very clever idea that is all the more enjoyable for knowing exactly how it’s going to end, the second being essentially a joke with a great punch line. Of more substance are stories like ‘Bad Beliefs’ (a brilliant take on a world where political correctness has gone into overdrive), ‘Leakage’ (where the most cherished memories of our cultural heritage are systematically destroyed by the violence of the present), ‘Daydream Nation’ (which presents an extremely complicated landscape to be negotiated in the development of interpersonal relationships with a beautifully subtle finishing line) and ‘Personal Jesus’ (where GodTM is available to all through an iPod-like device).

There are several standout stories in evidence. ‘Shipbreaker’ is a solid piece of good ol’ science fiction with some genuinely interesting concepts bandied about and an ending that leaves you wanting more. There is mention in Di Filippo’s introduction to the story of a follow up piece and I’d certainly love to see it. ‘Harsh Oases’ belongs to Di Filippo’s Ribofunk series of stories and tells the story of the protection and development of a young person who embodies the genetic diversity of the splices, a species of genetically altered human bred for commercial use that is being systematically weeded out of existence. The story is also an excuse to explore how life could exist in a variety of extreme environments. ‘Escape from New Austin’ beautifully illustrates a United States fractured along Redneck/non-Redneck lines and has an ending that nicely pulls the rug from under our feet. ‘Pinocchia’ is an outrageously pornographic retelling of the story of Pinocchio in a science fictional setting. The donkeys are hung like um… donkeys and it’s a certain part of the female anatomy (that us poor men are constantly being told we can’t find) which grows every time Pinocchia tells a lie. Finally, ‘Femaville 29’ is a post natural disaster story that brings together an ex-cop and a single mom and her daughter in a tented city erected to house the dispossessed. While awaiting relocation, the relationship grows, as do the mysterious activities of the large population of children on the site. Beautifully written and very much reminiscent of the best work of Lucius Shepard (who Di Filippo cites as his influence for this one).

All told, a cracking collection and one I would highly recommend as a good entry point for anyone not already familiar with the work of Paul Di Filippo.

I have had fiction published in Fear the Reaper, Emerald Eye: The Best of Irish Imaginative Fiction, Transtories, The World SF Blog, Revival Literary Journal, First Contact, FTL, Woman’s Way, Jupiter Magazine and several other venues. Currently looking for a publisher for my novel Down and Out. I was co-editor of Albedo One from 1993 to 2013 and co-administrator of its International Aeon Award for Short Fiction from 2005 to 2013. Previous to that I edited several issues of FTL (1990 – 1992). I’ve also edited Writing4all: The Best of 2009 and Box of Delights, an original horror anthology from Aeon Press Books.
View all posts by John Kenny »
« Editing As You Go: Why You Shouldn’t
On Government Co-opting the Arts »