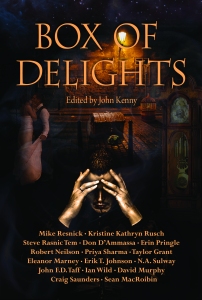 I’ve just received news that ‘The Show’ by Priya Sharma, which features in Box of Delights, the horror anthology I edited for Aeon Press, has been chosen by Ellen Datlow for her Best Horror of the Year: Volume 4. It’s due out in May of this year from Night Shade Books. In the meantime, of course, you can purchase a copy of Box of Delights here and read the story, along with a clutch of other excellent stories by the likes of Mike Resnick, Kristine Kathryn Rusch, Steve Rasnic Tem, Don D’Ammassa and others. Congratulations, Priya!

I have had fiction published in Fear the Reaper, Emerald Eye: The Best of Irish Imaginative Fiction, Transtories, The World SF Blog, Revival Literary Journal, First Contact, FTL, Woman’s Way, Jupiter Magazine and several other venues. Currently looking for a publisher for my novel Down and Out. I was co-editor of Albedo One from 1993 to 2013 and co-administrator of its International Aeon Award for Short Fiction from 2005 to 2013. Previous to that I edited several issues of FTL (1990 – 1992). I’ve also edited Writing4all: The Best of 2009 and Box of Delights, an original horror anthology from Aeon Press Books.
View all posts by John Kenny »
« Book Review: Booklife by Jeff VanderMeer
The Night I Got Mugged While Reading Angela Carter »