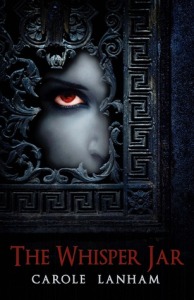 There is the danger that a casual perusal of the contents page of Carole Lanham’s collection The Whisper Jar may give the potential reader the impression that this is a work of whimsy, but nothing could be further from the truth. There is certainly an element of whimsy sown into some of the stories, but it is a whimsy that can turn suddenly dark and in the most unexpected and subtle ways. Characters find themselves enticed along a path of discovery that is childish innocence itself, each new stage of discovery obliging a further commitment that slowly but surely entangles the protagonist in a web that ultimately proves impossible to escape.

Two poems, ‘The Whisper Jar’ and ‘The Adventures of Velvet Honeybone, Girl Werewuff’ set the tone of dark whimsy; the short stories delve more deeply and subtly into this realm. In ‘The Good Part’ we see a young boy try to come to terms with a sudden and dreadful change in his sister, how he tries to normalise her behaviour and how, ultimately, he is willing to sacrifice everything in order to continue being with her. ‘Keepity Keep’ is a fairy story like you’ve never read before. The reader is drawn into a story that on the surface revels in a magical recounting of childhood enthusiasms, but at its heart is a story of jealousy and competition and the inevitability of growing up and leaving childish things behind. The focus of ‘The Blue Word’ is the imminent graduation of a group of children from a Catholic run orphanage in a post apocalyptic world. There’s a hint of Never Let Me Go to this story, but Lanham creates a world radically different to that of Ishiguro’s novel, with horrific discoveries along the way and an achingly sad denouement.

All the stories in The Whisper Jar are told from the viewpoint of children on the verge of puberty and Lanham demonstrates a remarkable facility in capturing perfectly the voice of innocence and insatiable curiosity that presages this difficult rite of passage. There is also a genuine unpredictability to the stories; the reader has no real idea what’s going to happen. Markers are placed here and there in each story and readers can indulge in second guessing the outcomes, but even when they are close, there will be intangible differences of emphasis and meaning to anything they care to posit.

‘Maxwell Treat’s Museum of Torture for Young Girls and Boys’ tells the story of a boy who loses his parents to an accident on a railroad track and is sent to live on a farm with his cousins. Maxwell Treat, the elder of the cousins, enrols the hapless orphan in assisting in the development of a museum of torture out in one of the barns on the farm and things rapidly get out of control. In ‘Friar Garden, Mister Samuel, and the Jilly Jally Butter Mints’, Esme Padora, along with her friend Sam Bell, is drawn into the dream-like, surreal world of her mentally deficient sister Estrella. The innocence of this world is slowly darkened by emotions and desires they have little or no control over and struggle to understand. Misunderstanding, when the children intersect with the adult world, eventually leads to disaster.

There is a timelessness to these stories; only two make any attempt at placing themselves in a specific timeframe: ‘The Blue Word’ is plainly set in a post apocalyptic world and ‘The Forgotten Orphan’ seems to occur sometime before the First World War. There is a deceptively simple beauty to Lanham’s style and approach to the language of each piece, an intense sense of place if not time, unless we consider childhood as ‘time’. A hint of Bradbury can be detected in several of the stories, but there’s a distinctly darker edge, suffused with an erotic undercurrent and a gentle and understanding humour, that is all Lanham’s own.

I have had fiction published in Fear the Reaper, Emerald Eye: The Best of Irish Imaginative Fiction, Transtories, The World SF Blog, Revival Literary Journal, First Contact, FTL, Woman’s Way, Jupiter Magazine and several other venues. Currently looking for a publisher for my novel Down and Out. I was co-editor of Albedo One from 1993 to 2013 and co-administrator of its International Aeon Award for Short Fiction from 2005 to 2013. Previous to that I edited several issues of FTL (1990 – 1992). I’ve also edited Writing4all: The Best of 2009 and Box of Delights, an original horror anthology from Aeon Press Books.
View all posts by John Kenny »
« Submitting Your Work Part 3: Cover Letters
Self-publishing and the Editorial Process – Guest Blog »

3 thoughts on “Book Review: The Whisper Jar by Carole Lanham”