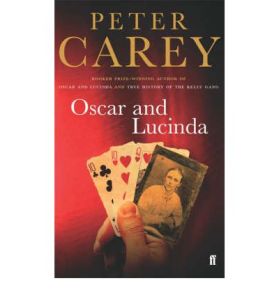 Oscar and Lucinda was the first of several novels I’ve read by Peter Carey and it’s still my favourite of his books. It tells the story of clergyman Oscar Hopkins and heiress Lucinda Leplastrier, both addicted gamblers of opposing type: one obsessive, one compulsive, both necessarily secretive, both bound by the strictures of mid-19th Century Australia, and both drawn to each other in a love that cannot be permitted by the code of the day.

Many will have seen the movie and enjoyed it, but anyone who has read the book will find the movie disappointing. The primary reason is that the movie dispenses with the first half of the novel (some 300 pages!), which is the complex and beautifully written story of each of the main characters before they meet each other. It is this part of the book that lends the second half of the novel its tragic and compelling power. The sheer impossibility of their love for one another is painstakingly delineated as impending disaster approaches.

The language of the novel is truly Dickensian in its detail and its scope and lends the story a convincing verisimilitude. There is also much humour throughout; a particularly memorable scene relating to the entry of a lady of high moral fibre through the window of Oscar’s presbytery drawing room while he tries to hide evidence of his gambling nature is hysterically funny. We are also treated to a fascinating insight into the differing qualities of Oscar’s and Lucinda’s addiction, with an examination of the various gambling systems they develop along the way and their degrees of success and failure.

It is a book of monumental scope and breath of vision. The only thing I’d advise readers to do is persevere through the first 40 pages or so, which give a detailed account of the various Protestant splinter faiths. After that, the story takes off.

I have had fiction published in Fear the Reaper, Emerald Eye: The Best of Irish Imaginative Fiction, Transtories, The World SF Blog, Revival Literary Journal, First Contact, FTL, Woman’s Way, Jupiter Magazine and several other venues. Currently looking for a publisher for my novel Down and Out. I was co-editor of Albedo One from 1993 to 2013 and co-administrator of its International Aeon Award for Short Fiction from 2005 to 2013. Previous to that I edited several issues of FTL (1990 – 1992). I’ve also edited Writing4all: The Best of 2009 and Box of Delights, an original horror anthology from Aeon Press Books.
View all posts by John Kenny »
« The Art of Fusing Fact and Fiction: John Kenny talks to Brian J. Showers
My Regrettable Non-relationship with Libraries – Guest Blog »

4 thoughts on “Book Review: Oscar and Lucinda by Peter Carey”