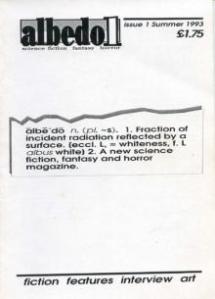 Questions on the publishing of Albedo One:

Alex Dunne: How did the idea of creating a magazine like Albedo One come about?

John Kenny: The original founding editors of Albedo One (John Kenny, Robert Neilson, David Murphy and Brendan Ryder) were members of the now defunct Irish Science Fiction Association (ISFA). The ISFA produced a magazine called FTL, which ran for a number of years before the committee decided to axe it (which is a whole other story). FTL was followed by another ISFA magazine called Phase, which died after three or four issues. After a couple of years Bob, Dave, Brendan and myself decided if the ISFA wasn’t going to produce something perhaps we could put out our own magazine. The name came about from a desire to have a title that started with ‘A’. We also felt the scientific term ‘albedo’ was very applicable, as we saw SF as ‘reflecting’ our present day society. The ‘One’ in the title means 1.0 or 100%.

AD: What processes did you go through in setting the magazine up?

JK: We met in Brendan’s house to come up with the name. Then, as we didn’t have much in the way of content, we shamelessly included short stories by Bob, Dave and myself to get the ball rolling. We had access to artists who had worked with Phase magazine and asked them to illustrate the stories. As luck would have it, Julian May was in town and Brendan, and his wife Helen, interviewed her for the first issue. Viola: almost instant first issue. We photocopied the early issue, folded to A5 size and stapled.

AD: Were you involved in Albedo’s predecessors (FTL/Stargate)? What was your experience working with these magazines?

JK: Stargate was the ISFA’s first magazine (which had been running for a few years before I joined in 1980). I had little involvement in that one apart from writing book reviews and illustrating the cover of one issue. FTL came later and I was the editor of that for the first couple of issues and then again later for another couple of issues. I was involved in picking the contents and artwork and the all the usual aspects of getting the issues to print.

AD: Do you receive any funding from the arts council? If the answer is no what reason (if any) were you given?

JK: We approached the Arts Council a few times, but we were always turned down. One reason given was, sure we were doing all right on our own (the fact that the magazine looked good went against us). Of course half the reason we wanted funding was to be able to pay a proper rate to the writers. This aspect of our application didn’t really get a response from the Arts Council. The other reason given us on another occasion was that it wasn’t worth the Arts Officer’s job to bring this application before the board (because it was SF).

AD: Do you receive any other support or sponsorship for the publication of the magazine?

JK: No. We survive entirely on sales and subscriptions.

AD: What is the average circulation of the magazine?

AD: Are most sales made through a subscription basis and where do you sell the most magazines (Ireland/abroad)?

AD: Have you experienced much difficulty getting Albedo One into shops?

JK: No, not with bookshops that stock a lot of magazines. We have, though, had difficulty with some the bigger chain stores like Waterstones, who would occasionally stock it for us and not pay for copies sold. We’re owed a lot of money from a number of the bigger stockists.

AD: What is your marketing strategy?

JK: To be honest, we don’t have one. We largely depend on word of mouth. We’re in the middle of a major revamp of the website at the moment and maintain a Facebook page. When the new site is ready to launch we’ll be doing some PR for it in the hopes that we can attract more subscribers.

AD: What are the criteria behind your selection process? Is literary quality important to you?

JK: We primarily go for a good story that is character based. Good ideas and fresh angles on ideas are also a consideration. Literary quality is important to us, but that doesn’t mean we’re looking for flowery or self consciously literary language. Good writing is good writing.

AD: What was the reasoning behind your decision to found Aeon Press?

JK: We had been putting our own money into an account on a regular basis for a few years and decided we’d like to do something with it. As a side project to Albedo One, we decided to dip our toes into the book publishing business. And so, Aeon Press was born. Making a mark with sales has been difficult and funds are limited, which is why we’ve only published a half a dozen titles so far. We have been looking at doing another book probably in the next year or so, though.

AD: In your opinion, how difficult is it to sell a science fiction magazine to the Irish market?

JK: Very. There’s quite an audience for SF in Ireland, but there’s a touch of ‘not supporting your own’ in operation. We’re far more highly regarded abroad than here.

Questions on the topic of “Irish Science Fiction”:

AD: You describe Albedo One as a “horror, fantasy and science fiction” magazine, why did you decide to include all these genres in the magazine? Is it because of the types of submissions you receive/your own personal preferences?

JK: I guess we decided to include all those genres because we like them. We never considered doing separate magazines for each genre and didn’t have enough of a preference to decide to stick with one genre. The fantasy we tend to go for is dark fantasy, which is possibly closer to horror than anything else. It has meant, though, that the Years’ Best anthologies are possibly not paying as much attention to us because of this. Although we do include cover letters listing which of the stories they should look at in the context of their anthology. And we have had a few stories included in Years’ Bests, along with honourable mentions.

AD: Do you feel that these genres are increasingly drawing on each other for inspiration or that their position of being outside of “mainstream” literature necessitates fans of each to band together to promote them?

JK: We have discovered that there isn’t actually much cross over amongst the genres with regard to readers. There is more and more narrowing of reader preferences as time goes by, with some readers reading almost exclusively in not just one genre, but one sub-genre (e.g. urban fantasy).

AD: Do these genres perform different functions – i.e. is one read as pure escapism while another provides a social criticism?

JK: I don’t think so. All the genres have the scope to be thought provoking or simply escapist. Although SF has always been seen as the literature of ideas (not sure this is still the case, as big publishers narrow the definitions for marketing purposes. There is possibly more being done idea-wise with SF by mainstream authors – Specimen Days by Michael Cunningham, The Possibility of an Island by Michel Houellebecq, Cloud Atlas by David Mitchell, Kafka on the Shore by Haruki Murakami, and others).

AD: Do you think there is such a thing as a specifically Irish science fiction?

JK: Unfortunately, no. An Irish voice has not developed for SF. The voice of the genre is dominated by the US. Ireland has much more of a tradition in horror and fantasy and I don’t see that changing, despite the fact that we are a modern economy.

AD: How important is it to you and the rest of the editorial team that Albedo One and Aeon Press promote the writing of Irish authors?

JK: Very. We’re always delighted to see submissions from Irish writers and, without it being a specific requirement, we have noticed that we usually have one story from an Irish writer in each issue of the magazine. It just seems to work out that way when we pick the contents of each issue (we never check where the authors are from until afterwards).

AD: Why do you think it is that most Irish publishers are reluctant to publish science fiction/fantasy?

JK: Because they don’t know anything about those genres. Irish editors/publishers generally consider genre fiction to be for kids and will publish a little of it for that age group. When they occasionally dip their toes in the waters of genre fiction aimed at adults, they enlist the writing services of an Irish mainstream writer who knows nothing about the genres. What results is very poor and doesn’t sell well, which reinforces the publisher’s belief that there is either no market here for that kind of thing or it’s just for kids.

AD: Is there a market for science fiction in Ireland?

JK: Yes, but the reality is it’s small. I think there is real scope for a couple of small press publishers to make a modest impact here (and abroad), but the key is funding (whether private or public).

AD: Is there a science fiction community in Ireland?

JK: Not at the moment. There has been at several times over the course of the last thirty years, but what tends to happen is things build up nicely, then the committee schisms, people fall out with each other and everything disintegrates. A few years go by and somebody else comes along and tries to get something started. So whatever community exists at the moment is very fragmented.

AD: Do you feel that the internet has a significant impact on the culture of science fiction?

JK: Absolutely. It’s so easy now to set up a website, webzine, online discussion board, etc., etc. There is now so much more interaction internationally (although it can still be difficult to make an impact in the States if you are not American). The internet is possibly the most perfect expression for SF and I see a big move away from hard copy publications.