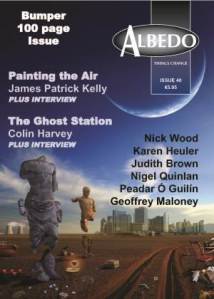 I received news just before Christmas, and have been meaning to post something about it since, that Karen Heuler‘s short story ‘Thick Water’, featured in issue 40 of Albedo One (the magazine I co-edit with Bob Neilson, Dave Murphy, Frank Ludlow and Peter Loftus), has been selected for inclusion in The Year’s Best SF #17, edited by David G. Hartwell and Kathryn Cramer, to be published by Harper Collins in the spring. You can, of course, in the interim, purchase a copy of the magazine here (pdf version available here) and read the story, along with other fine examples of speculative fiction and an interview with James Patrick Kelly. Congratulations, Karen!

I have had fiction published in Fear the Reaper, Emerald Eye: The Best of Irish Imaginative Fiction, Transtories, The World SF Blog, Revival Literary Journal, First Contact, FTL, Woman’s Way, Jupiter Magazine and several other venues. Currently looking for a publisher for my novel Down and Out. I was co-editor of Albedo One from 1993 to 2013 and co-administrator of its International Aeon Award for Short Fiction from 2005 to 2013. Previous to that I edited several issues of FTL (1990 – 1992). I’ve also edited Writing4all: The Best of 2009 and Box of Delights, an original horror anthology from Aeon Press Books.
View all posts by John Kenny »
« The Night I Got Mugged While Reading Angela Carter
Books vs. eBooks: Why Books Get My Vote »